Everything You Need to Know About Eternity Rings

There are two types of eternity rings.

Full Eternity Ring- These feature diamonds/gemstones the whole way around in a continuous line.

Half Eternity Ring- These have diamonds/gemstones only on the top face of the band. It is believed that the concept of eternity rings originated from Egyptian times. However, the beginning of the custom of giving diamond eternity rings did not start off as the romantic notion we have come to see it as. It actually came about when a diamond merchant DeBeers saw a clear money-making opportunity. It is widely accepted that DeBeers had a secret agreement with the Soviet Union. In order to monopolise the diamond supply for himself, he had to buy 95% of the uncut diamonds produced by Russia. These were a lot smaller than the diamonds which were popular at the time. So, in order to sell these unpopular small diamonds, he decided to put many diamonds in one ring. They were advertised towards older, married women calling them eternity rings. One of his slogans was “She married you for richer or poorer. Let her know how it’s going”.

When to Give Eternity Rings

Eternity rings usually feature diamonds and based on the traditional list of appropriate anniversary gifts. A diamond should be given on the sixtieth anniversary. However, for those who’d rather not wait that long, based on the more modern list, diamonds should be given on the first or tenth wedding anniversary. Recently, the eternity ring has become to symbolise the circle of life. It is often an appropriate gift upon the arrival of the first child. So, an eternity ring can be a symbol of the length of marriage. Or it can be a symbol of the extension of the family.

How to Wear an Eternity Ring

Here at Bespoke Diamonds, we have a wide range of eternity rings for you to view i our Dublin showroom. Please contact us to arrange an appointment for a day and time convenient for you. 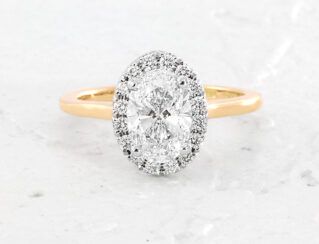